IN THE NEWS: Former “Little House on the Prairie” Child Star Calls Miley Cyrus Out on Salvia Scandal

You are here:Home-Cautionary Tales, CHILD ACTORS, Former Child Stars, In the News-IN THE NEWS: Former “Little House on the Prairie” Child Star Calls Miley Cyrus Out on Salvia Scandal
Previous Next

IN THE NEWS: Former “Little House on the Prairie” Child Star Calls Miley Cyrus Out on Salvia Scandal 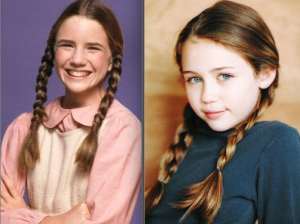 It’s a former child star showdown. In one corner we have former “Little House on the Prairie” child star, former SAG President, and Lifetime MOW regular, Melissa “Half-Pint” Gilbert and in the far corner, aka the smoking section, we have former “Hannah Montana” child star Miley “Half-Ounce” Cyrus.  The two actresses seem to have so much in common: television child stars of their own hit shows, media darlings, braid-lovers – so what’s all the fuss about?

As many of you know, a few days after her 18th birthday celebration, Miley Cyrus was knowingly filmed by a friend smoking a bong filled with what was alledgedly salvia – a plant that causes LSD-like hallucinations when smoked, but for unknown reasons is legal in the state of California.  You can watch the footage for yourself on TMZ so I won’t rehash the details here but it’s safe to say this footage is not likely to make it into the new series of family-friendly, celebrity FLIP video commercials.

In regards to the scandal, Melissa, the celebrity spokeswoman for The Partnership at Drugfree.org, (a nonprofit that helps parents prevent, intervene in, and find treatment for drug and alcohol use by their children), was quoted as telling AOL News, “How high do you have to be to let a friend film you? I think she wanted to get caught.”

In response to the statement that Miley was smoking Salvia and not Marijuana (as if that makes it somehow better), Gilbert retorted, “That’s bull—-!  I think it was marijuana.” 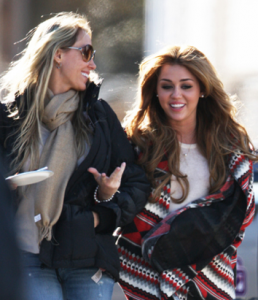 Miley has not made a statement regarding this video footage or the uproar it’s caused and was photographed on the set of her film, “So Undercover,” in New Orleans yucking it up with her momager, Tish Cyrus.

Popager Billy Ray Cyrus on the other hand had this to say via his twitter account last Friday, “Sorry guys. I had no idea. Just saw this stuff for the first time myself. I’m so sad. There is much beyond my control right now.”  As HMB reported last month, Billy Ray and Tish Cyrus are divorcing.

How has this news affected your kids? Are they even aware of the Cyrus salvia scandal?