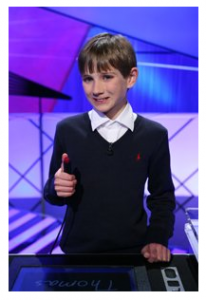 Director Stephen Daldry (The Reader) has cast Jeopardy-Kids Contestant and acting newbie Thomas Horn, 12, of Piedmont, California to play the son of mega-stars and Oscar winners Tom Hanks and Sandra Bullock in Extremely Loud and Incredibly Close. Horn will play Oskar Schell, an intelligent and loquacious 9-year old whose father is killed during the 9/11 World Trade Center terror attack. When Oskar finds a key in what remains of his father’s belongings, the young pacifist/vegan/scientist/artist sets out on a cathartic journey to locate the lock.

Horn is a real-life smarty pants who garnered national attention back in October 2010 when he won first place on the Alex Trebeck-hosted game show Jeopardy! Kids Week, taking home $31,800 in prize money. Horn is represented by ICM, alongside huge child talents Abigail Breslin, and Kodi Smit-McPhee (Let Me In) as well as former child stars Jody Foster and Christina Ricci.

Below is an excerpt from an interview done with Horn by SF’s Diablo Magazine a few days before he won the Kids Jeopardy title:
How did you get into trivia?

Horn: I have always liked reading books about facts and trivia as well as history. I also love to talk to people about what’s going on in the world and learning through conversation.

What kind of questions were you hoping they would ask?

My specialties are history, geography, and to a certain extent literature, so I was hoping they would ask questions about U.S. presidents, world capitals, and French writers. I’m terrible at music and pop culture so I didn’t want them to ask anything about that.

How did you prepare for the show? Did you practice your buzzer skills?

I watched lots of jeopardy and took online quizzes. I also bought quiz books that my parents used to quiz me. The buzzing in was nerve racking. I had a hard time with the buzzer at first during my audition and practice sessions but eventually I got the hang of it.

Have you always been a fan of Jeopardy?

I’ve been a fan of the show for about a year now. I first learned about Kids Week when I was watching and there was an advertisement for kids to take an online test. I registered for the test and a while later was called for an audition in L.A. I was nervous when I played the game but it was definitely exciting to meet Alex Trebek.

The winners of Kids Jeopardy get to take a family vacation to one of five locations. If you won which vacation would you choose?

I think I would choose the trip to Alaska because I have never been there and it seems like a beautiful trip. Also it’s not too far from home.

Would you want to do “Jeopardy!” again as an adult?

I would do it again and I it would be nice to have an advantage since I have already done it.