FREE MOVIES on The Green in Warner Center Park, Every Summer Saturday!

You are here:Home-CHILD STAR STYLE, Screenings, Parties & Union Events, THE BUZZ-FREE MOVIES on The Green in Warner Center Park, Every Summer Saturday!
Previous Next

FREE MOVIES on The Green in Warner Center Park, Every Summer Saturday!

Hollywood Mom Blog is aware that many Hollywood Moms & their children are here from out of town and looking for affordable and age-appropriate activities for their families. Fortunately, The Valley Cultural Center will continue its FREE Movies on the Green series with a screening of the animated film The Adventures of Tin Tin Saturday, August 4.

The G-rated film tells the story of the unquenchably curious young reporter Tintin and his fiercely loyal dog Snowy as they discover a model ship carrying an explosive secret. Drawn into a centuries-old mystery, Tintin finds himself in the sight lines of Ivan Ivanovitch Sakharine, a diabolical villain who believes Tintin has stolen a priceless treasure tied to dastardly pirate named Red Rackham. But with the help of his dog Snowy, the salty, cantankerous Captain Haddock and the bumbling detectives Thompson & Thomson, Tintin will travel half the world, outwitting and outrunning his enemies in a breathless chase to find the final resting place of The Unicorn, a shipwreck that may hold the key to vast fortune – and an ancient curse.  From the high seas to the sands of North African deserts, every new twist and turn sweeps Tintin and his friends to escalating levels of thrills and peril, proving that when you dare to risk everything, there’s no limit to what you can do. 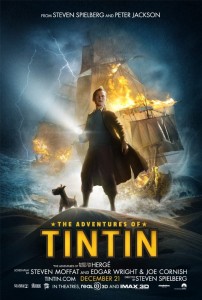 The 2011 film features the voices of Jamie Bell, Andy Serkis and Daniel Craig.

Films are projected on a 30-foot screen with digital projections and 7.1 surround sound. Warner Center Park is at 5800 Topanga Canyon Blvd.

Bring blankets, jackets, food, drinks and folding chairs for the over 30 set.

The following is the schedule for the remainder of the series:

Aug. 4: The Adventures of Tin Tin