You are here:Home-Cautionary Tales, CHILD ACTORS, Child Stars, In the News, THE BUZZ-IN THE NEWS: Risque Photos Leaked of Disney Teen Star Demi Lovato. Rumors of “More to Come.”
Previous Next 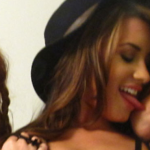 This hasn’t been a good week for Disney Teen Stars.

Splashed across multiple on-line sources today are risque leaked photos of troubled Disney teen star Demi Lovato.  HMB won’t post them here but they’re more than easy to find if you’re so inclined.  One photo, a portion of which is on our lead page, shows Lovato with some of her female dancers flashing cleavage. Another picture is a more intimate photo of Demi provocatively licking the face of a female dancer (Cropped version Left) and the third photo posted today is of multiple black and white pics of Lovato wearing only a dark lace bra (not shown) in what appears to be a bathroom stall.

So here’s the kicker – rumors have it an explicit “tape” exists and will soon make it’s way to the world wide web. Let’s hope this is not true and that if it is true, Disney’s massive legal team puts a stop to it’s release.

If your children are on the internet, you may want to speak with them about this unfortunate incident before they come across it in the news.  HMB will be checking in with the professionals at West Coast Counseling Center for their view on why child stars often implode in such grand fashion and what steps we as parents of child actors can take to avoid these pitfalls.