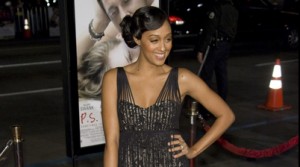 Tia and Tamera Mowry starred in the tween television show “Sister, Sister.”   The fact the twin sisters managed to survive their childhood stardom and remain unscathed by the tabloids which haunt many of their fellow child actors was not accidental.

Tia, an award-winning actress and star of the CW’s “The Game,” attributes a college education and good parenting as the reasons she and her sister Tamera survived teen fame and have continued to remain successful in the industry.  I ran into Tia at our local grocery store a few years back and was struck by how incredibly happy and carefree she appeared to be.  No entourage, paparazzi, no dark sunglasses or baseball cap covering her face; just a pretty young woman grocery shopping on a Saturday afternoon.  While that may not sound like an amazing feat, trust me, in Tinsel Town it is.

In an interview with Star Scoop, Tia expounds on her relationship with her Hollywood Mom Darlene Mowry, the importance of education and her time at Pepperdine University in Malibu, CA studying psychology.

“I grew up with my mom, who is an amazing woman who says the key to success is an education.  She said that’s where it starts first, being educated. Especially as a woman. It was important to me because, I think this is a good example, I really want to say this for the kids out there: I already kinda knew what I wanted to do with my life. I knew I wanted to act, and I was already making money, but I still went to college because it’s not really just all about figuring out what you want to do with your life, it’s all about experience [of college] and the experience teaches you, it helps you become who you are as a person. It teaches you about culture, how you should interact with the world and with your surroundings.  Because you’re going on campus, you’re meeting all these new people from all around the world, and that’s how it’s gonna be when you’re on your own. It was a great vehicle for me, to I guess, help me define who I was as person.”

When asked in a recent interview with Jawn Murray of Black Voices if the transition from child actor was a difficult one, Tia shared the following:

“At first, [the transition from child actor] is very hard. Even when you’re going on auditions now, after ‘The Game’,  I still run into people that still think I’m the little girl from ‘Sister Sister’ and I’m like, have you been watching the show? It’s always a challenge and a struggle when you start out as a child actor because people tend to label you because that’s all they seem to know you as is the girl from ‘Sister Sister.’ One thing that I do feel blessed about is that I [allowed] myself to grow up. You didn’t see me in lingerie or forcing myself on the public to say I’m an adult now. I’m not on a cover of King Magazine, [and] I’m not denouncing anybody who has done that, but personally, I’ve allowed myself to grow up. I went to college; [sic] I traveled the world and then I threw myself out there and auditioned again.”

“Some people get it and some people don’t. I had to work hard for ‘The Game.’ I really had to let Mara Brock-Akil [creator of ‘The Game’] know that I’m not that little curly haired girl that was on ‘Sister Sister’ talking about boys and homework. I’m a woman now and life is all about experiences. When you’re an actress, you bring those experiences to life through characters and I’m able to do that.”

Mowry is thankful for Dawn Ostroff, the CW’s President, and “The Game” creator Mara Brock-Akil and producer Kelsey Grammar, for giving her an opportunity to prove herself as an actress.  “To me, that’s what it’s all about. I love a challenge.”