You are here:Home-CHILD ACTORS, Giving Back, THE BUZZ-Young Casts of “iCarly” and “Victorious” Raise Funds for St. Jude Children’s Hospital!
Previous Next 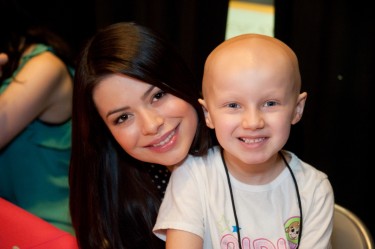 The casts of the hit NICK shows “iCarly” (Miranda Cosgrove, Nathan Kress) and “Victorious” (Victoria Justice, Ariana Grande) traveled to Memphis, Tenn., this past weekend to tour and raise funds for St. Jude Children’s Research Hospital. During their stay, the casts hosted a charity event titled “Stars For The Kids” and raised more than $100,000 for the kids of St. Jude. They then visited the hospital to meet with patients; participate in a variety of fun activities like cupcake decorating and arts and crafts; and hold a special screening of both show’s exclusively for St. Jude patients and their family members. During the event, “iCarly” star Miranda Cosgrove got a special 18th birthday surprise from all her new friends at St. Jude. Click Here to Watch Miranda’s Birthday Surprise!

“The best part of my visit today at St. Jude has been seeing the smiles on the kids’ faces as they talk about the shows and their favorite episodes,” said Cosgrove. “They are so adorable and it makes me happy to be here.”

St. Jude Children’s Research Hospital is internationally recognized for its pioneering work in finding cures and saving children with cancer and other catastrophic diseases. St. Jude freely shares its discoveries with scientific and medical communities around the world, helping kids who never even visit the hospital. St. Jude is the only pediatric cancer research center where families never pay for treatment not covered by insurance, and no child is ever denied treatment because of the family’s inability to pay. To learn more visit www.stjude.org.

MIRANDA COSGROVE is an American film and television actress and pop recording artist. Cosgrove is Carly in “iCarly.” Her career started at the age of three with television commercials. Cosgrove’s film debut was in 2003, as Summer Hathaway in “School of Rock.” After years of small television appearances, Cosgrove was cast on Drake & Joshand later in iCarly. Cosgrove earns $180,000 per episode of iCarly, making her the second highest paid child star on television.

VICTORIA JUSTICE’s show, about a girl with average talents who tries to fit in with a group of prodigies at a high school for the performing arts, is seen by 6.7 million kids a week. She just made her first music video this year, a “you-cheated-on-me-and-I’m-not-taking-you back” song called “Beggin’ on Your Knees” and she recently graced the cover of Seventeen Magazine. Next up, Victoria stars in the movie “The Kings of Appletown,” with Disney kids, Dylan and Cole Sprouse.

NATHAN KRESS has a passion for acting and stepping into the shoes of different characters. His earliest role was a voice for Babe: Pig in the City. Then, at age 11, he started appearing in films like The Village, Cat in the Hat, and Enemy of the State. He did parts in The Suite Life of Zack and Cody, as well as plenty of voiceover for animation and video games, before landing the regular role of Freddie on iCarly. In real life, he likes technology, but maybe not quite as much as Freddie does. He also likes to experience the outdoors, camping and fishing.

ARIANA GRANDE made her Broadway debut in the original role of Charlotte in “13,” the musical, earning her a National Youth Theatre Association Award. Most recently, she played the role of Miriam in the first reading of the new musical, “Cuba Libre,” written and produced by Desmond Child, a producer for Katy Perry. Ariana has also worked on recordings with Grammy Award-winning composers such as Diane Warren. In the summer of 2009, as a member of “Broadway in South Africa”, Ariana performed and taught both music and dance to children in Gugulethu, South Africa. 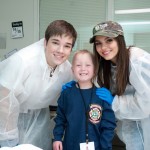 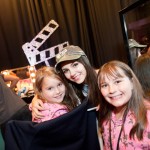 Victoria poses with a couple of kids at St. Jude Children’s Research Hospital 5.15. 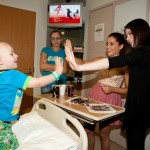