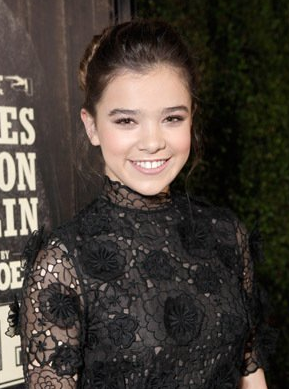 It’s no secret that Hailee Steinfeld is Hollywood Mom Blog’s first choice for the 2011 Academy Award for Best Supporting Actress for her debut performance in the Western “True Grit.” Aside from the very legitimate rumors that she’s being considered to portray Katniss, the highly coveted role of the heroine in the film adaptation of “The Hunger Games,” website Deadline Hollywood, has announced that Steinfeld has been cast in Cat Patrick’s romantic-psychological-thriller-novel-turned-film-project, “Forgotten.” The project, to be published in June, was acquired by Paramount as a star vehicle for Hailee. In it, she will play London Lane, a highschool student who loses her memory every day at 4:33 p.m and can only recall things that happen in her future. She also relies on notes to herself, as well as a school friend, to help guide her through life.London eventually meets a boy who doesn’t appear in her flash forwards, where disturbances begin to unfold.