Former Child Star, Angus T. Jones is Back to Work on “Two & A Half Men”

Former Child Star, Angus T. Jones is Back to Work on “Two & A Half Men”

Two And A Half Men’s controversial co-star Angus T. Jones, now 19, is returning to the set for the first time following his religious You Tube proclamation in late 2012, per Deadline.com.  You may recall Jones’ decrying his top-rates series as “filth” and his pleas to viewers to “stop watching.” 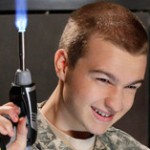 Against all odds, producers are giving the former child star a larger than normal storyline for his character Jake in his first return episode. Older actress, Jaime Pressly (My Name is Earl) has been cast as Jake’s “Cougar” love interest – a potentially recurring role.

Lorre went on to concur with Jones’ “filthy” comment from the You Tube tirade: “I can’t really disagree with him — the show’s kind of filthy. What he said wasn’t wrong… We hope it’s funny, as well.”

Angus T. Jones is represented by the Paradigm Agency.