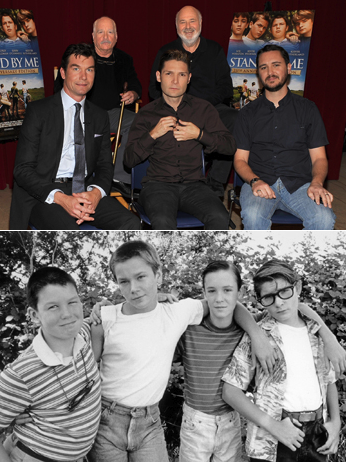 Former child stars Jerry O’Connell, Corey Feldman and Wil Wheaton reunited in Los Angeles Wednesday to celebrate the 25th anniversary of their 1986 coming-of-age classic Stand By Me and the release of the film on Blue Ray DVD. The film’s other child star, River Phoenix, older brother of Joaquin, famously died in 1993 outside of Johnny’s Depp’s bar, “The Viper Room.”  He was only 23. Co-star Richard Dreyfus and director Rob Reiner were also on hand to partake in the celebration.

Based on a novella by Stephen King, Stand By Me was based around a writer, (played by Dreyfuss), who is reflecting on his childhood. Rejected by his father following the death of an older brother, Gordie, (Wheaton), finds comfort in the company of his pals Chris Chambers, (Phoenix), Teddy Duchamp, (Feldman) and Vern Tessio (O’Connell). Together they set off on a summer excursion to find the body of a boy killed by a train.

Stand by Me was the recipient of Golden Globe nominations for “best motion picture, drama” and “best director,” and an Academy Award nomination for best adapted screenplay.