I am thrilled to announce that my infant son Cash will now be working with a top Modeling Agency, the premier baby modeling agency in Southern California!

When I was told the agency had accepted Cash as one of their models, I was also told that I needed 40 outdoor, clean shots of him in brightly-colored clothes with no logos or cartoon characters.  Wow.  to the uninitiated this may seem like a plausible request, but I was instantly worried about the obstacles I was sure to face.

Do you have any idea how difficult it is to find brightly-colored shirts for 6-month-old boys that are completely free of cute sayings and cartoon characters? 4 stores and 3 adorable outfits later, my mission was complete and they were all on clearance, thankyouverymuch.

2. Outdoor Lighting – It is best to take photographs in the early morning or the late afternoon.  At other times of the day the direct sunlight causes shadows and squinting babies aren’t as cute as happily-shaded babies.  However, this is so much easier said than done.   Most mornings were so busy that I found myself racing against the sun, begging it not to move around the corner of my building so I would still be able to shoot inside the apartment as the sun came in through the East-facing windows.

If I tried to shoot outside, this meant releasing “the beast” (aka Shelby, my 2.5-year-old) into her natural habitat.  I would, in turn, spend every second making sure she doesn’t hurt herself (or one of the unsuspecting bugs on the sidewalk) and not be able to take any pictures, completely defeating the purpose of going outside in the first place.  In the end, I got the shots with some impromptu late afternoon shoots with the sun coming in from the South-side windows.  The money shot, as I like to call it, I got when I managed to sneak away sans toddler to the park one early morning.

3. Supported Sitter – While I am not trying to rush his life as a baby, it would have been tremendously easier to take good pictures of Cash if he could sit up on his own.  I have been saying that I can’t wait for him to sit up since day one, though, because I need 4 sets of hands to accomplish anything.  Or maybe I think it will be so cute when he can sit with Shelby and really play and interact with her.  But for the pictures, I had to sneakily hold him upright with one hand and then take one-handed shots with the other – causing many of them to come out blurry for obvious reasons.  As of a few days ago, he’s actually started balancing solo for a fair amount of time.  So for round two of pictures, this shouldn’t be an issue.

A few sunny days, plenty of funny faces, and about 400 pictures later, I had a fairly decent collection of photos.  The top 40 were whittled down to 4 and here we are – ready to roll – bring on the castings! 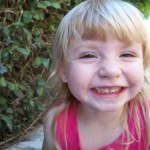 And for those of you who are wondering, Shelby’s look just wasn’t right for the agency at this time.  But no worries!  We are shopping around for another agency just for her.

Written by HMB Contributor & Product Reviewer Michele Dahl. Follow her foray into the world of baby and toddler modeling here on HMB! You can follow Michele on Twitter @MomNamedElle