You are here:Home-CHILD ACTORS-Child Stars-Emma Roberts admires Actress Anne Hathaway. Lindsay Lohan, Not so Much.
Previous Next 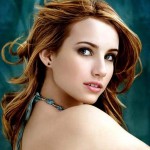 Hotel for Dogs‘ Emma Roberts, niece of Julia Roberts and daughter of Eric Roberts, shared with Moviefone.com in a recent interview that she would like to emulate the career path of Actress Anne Hathaway (Rachel Getting Married), also once a child actor known for Disney fare (Princess Diaries, Ella Enchanted).  I watched Anne Hathaway present at the recent “Behind the Camera” Awards Ceremony and she’s so talented, so eloquent that choosing Hathaway over almost all former child stars as a role model is really a no brainer.

Roberts gives fellow child actors advice on how one successfully moves from child roles to more mature film themes and characters. In her view Lohan has failed to exhibit what we here at the HMB refer to as “the transition factor.”

“I just think it’s very thin ice you’re walking on, to make the transition from child actor to adolescence. Because, you know, so many people just mess it up, and they do things that are so outrageous. Like, Lindsay Lohan, you still know that she was in Freaky Friday and The Parent Trap, and it’s hard to take her seriously.  So that’s why I really like – like, Anne Hathaway is a great example. I think she’s been nominated for so many awards this year. And the fact that she starred in a Disney movie when she was in her teens – a lot of people don’t even know I don’t think.”