To say that television and film producer Irene Dreayer (known simply as “The Dray” to her extended family of child stars) is an expert in her field is a drastic understatement. Here is brief overview of her professional credentials:

Whew! Is that a resume or what?  And in addition to all of this, the Dray is now providing one-on-one mentoring to aspiring child actors via her new program, “The Dray Way,”a revolutionary program I personally cannot wait to share with our readers.  And thanks to Irene and her team, Hollywood Mom Blog readers are being exclusively offered the lowest prices on these sessions. Make a note of code HMDW-135Skype, and be certain to use it when you sign up, to receive another $20 discount off the all ready reasonable rates.

When I first met Irene, I  was immediately struck by her warmth, sincerity and confidence.  It’s easy to see why “her kids,” as she calls them, love her so much. Here is this first information-packed portion of our two-part interview with the Dray:

HMB: Which came first for you, talent management or executive producing children’s television?

Dray: Talent management came first. I’ve always had an eye for talent.  It’s really my gift. Executive producing shows came second and came from discovering talent and finding them the right shows to star in. I represented some of the kids I put in my shows, and some I did not.

HMB: What drew you to managing kids and producing children’s television, as opposed to working with adults?

Dray: First of all…I love kids!  I don’t have children of my own, so I was drawn to kid talent and have treated these kids as if they were my own.  Because I am forever young at heart, I have always been able to relate to tweens and teens.  I have represented adult actors and writers as well but, I find the “kid world” of entertainment much more fun!  There’s a big need for quality  “family” programming… so the shows I produce are fun for the whole family.

HGB: Over the years you’ve managed the Mowry girls, currently manage twin sisters Milly and Becky Rosso and worked with twin brothers Dylan and Cole Sprouse just shy of a decade on “Suite Life.”  Do you feel it is easier for twin kids to break in and make it in Hollywood than their single child counterparts?

Dray: I discovered Tia and Tamera at the age of 13, and although I did not manage them, I sold the show “Sister, Sister” staring the girls as my first set of twins.

It’s astonishing that I have discovered 3 sets of twins and executive produced television shows starring all of them!  It is not necessarily “easier” for twin actors to be discovered, although it can be advantageous, especially when they are young. Many times a set of twins is actually playing only one character, as this is helpful in balancing a shoot day due to limited hours, schooling and the ever-present crying game.  Mary Kate and Ashley, for example, were probably the most famous twins who portrayed one character on the show “Full House.”  The 3 sets of twins I have discovered and produced starred in their own show as twins.  There’s clearly a fascination and appeal for the audience watching identical twins, boys or girls.

HMB: Do you prefer discovering and molding twins versus individual kids?

Dray: No, not necessarily.   It just happened to turn out that way.  There is no difference for me…a star is a star.

HMB: Cole Sprouse and Debby Ryan told me that the Rosso twins were discovered in the audience of “Sweet Life.”  Then I read on your website that you were the one who discovered them. Can you tell us how this happened and whether they had any acting experience prior?

Dray: When we’re taping a show like Suite Life in front of a live audience, we hire a comedian to entertain the audience while sets are being moved.  One particular taping, our “warm-up guy” (as they are referred to) asked the audience who was here from out of town.  The Rosso twins, Milly and Becky, had just moved to Los Angeles from England a few weeks prior and raised their hands…of course at the same time.  The warm-up guy asked them their names and where they were from and yelled out, “Oh!  You’re twins!”  The “twin-meister,” yours truly, pole-vaulted into the stands to meet them.  I asked them if they have ever acted or had dreams to become stars and they said no, but admitted that they loved to sing, dance and entertain.  They thought stardom was an unattainable dream.  I met with them the next day in my office and I saw just what I needed to see: They were beautiful, adorable…and British!! And they had a desire that came from them, not their mother.  I said to myself, Dray, these girls are very special and registered high on the “Draymeter.”  I knew I could market them.  They had just enough dreams, desires and commitment.  I put them in acting classes immediately.  As a result they were cast as reoccurring characters, Jessica and Janice on Suite Life of Zack and Cody and Suite Life on Deck.  They also starred in the TV movie “Legally Blondes” for MGM and Disney. I was right! 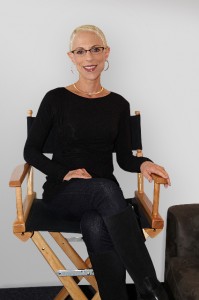 Dray: First and foremost…it has to be the child’s dream not their parents’.  I look for commitment and passion. I determine if they are marketable, unique, different and something we haven’t seen before.  Many times I meet with kids and they’re just beginning and have no representation.  If I feel (using the Draymeter) that this child is unique and saleable, I would jump in as a manager.  If it is a long road, I may decide that managing the child is something I might not have the time to do.  It’s really a case-by-case decision. Again, if I feel that they’re worth pursuing, then yes, I will consider management.

HMB: What look or type is popular or trending right now for kids in television?

Dray: Being REAL!!  We want to cast kids that other kids consider like themselves and can relate to… tall, short, fat, thin, popular, nerdy.  Not everyone is perfect.  Kid actors that are “character-types” are seen more and more on television.  As a producer, I constantly put pressure on our casting staff to find those young actors that are “different” and “unique” and what real kids look like today.

HMB: As a television producer, for Disney specifically, do you prefer hiring children who are triple threats (actors, singers, dancers) or do you evaluate talent on acting ability and “potential” in those other areas?

Dray: Of course being able to do it all is fabulous, but it depends on the part.  You don’t need to have all three unless the role requires it.

HMB: How important are a child’s parents in your decision to hire a given child actor?

Dray: VERY IMPORTANT, it’s huge.  I ask myself these questions when I meet a child’s parents: Is this the parents’ dream and not the child’s?  Are the parents looking for a bread-winner?  How do they perceive their child?  Do they consistently interrupt and voice their opinion when it is not requested?  Do they count the number of lines their child has?

HMB: What traits do you look for and/or avoid in parents of child actors?

HMB: Could difficult parents ever be a “deal breaker” in hiring a given child for a role?

Dray: Absolutely.  I have had to endure extremely difficult parents and had a series cancel due to the obtrusive and horrific way the parents behaved.  Bad behavior is not tolerated.  Parents have been escorted off the lot..  Because of these types of parents, kids have not been hired.  Make no mistake parents, you have your own role to play in this.  And when given a choice between two kid actors of equal ability, guess who will get the part?

Bookmark HMB as a favorite and check back for part 2 of our interview with Irene “The Dray” Dreayer, Executive Producer of The Suite Life on Deck and creator of “The Dray Way!” If you just can’t wait until the next interview, and you want to sign up to speak with the Dray right away, click on this special link and enter code HMDW-135Skype for an additional $20 dollars off! Watch the video webinar below to get a feel for how these educational one-of-a-kind skype session with the Irene come to life, The Dray Way!