You are here:Home-Hollywood Happenings, THE BUZZ, THE HOLLYWOOD LIFE-FREE TICKETS to Nickelodeon Show “BUCKET & SKINNER’S EPIC ADVENTURES
Previous Next 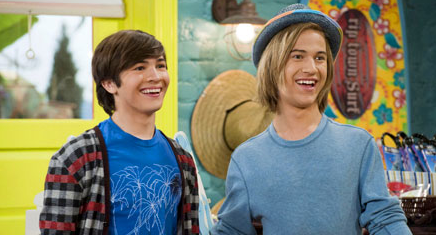 “Bucket and Skinners Epic Adventures” follows the escapades of two best friend surfers on their quest for awesomeness in the beach town of Pacific Bluffs, California. While Bucket (Taylor Gray) is a 15 year old Freshman who has his sites set on taking high school by storm, making the surf team, becoming class President and dating his lifetime crush, Kelly, an upperclassman, Skinner (Dillon Lane) his lifelong buddy, is completely satisfied just eating tacos and catching waves. Whether it s dealing with the arrogant sophomore bully, Aloe, (Glenn McCuen) trying not to be outwitted by Kelly’s conniving little sister, Piper (Tiffany Espensen) or just hanging out at Bucket’s Uncle’s surf shop, these two friends are inseparable. They may not be the smartest guys in the world, but nothing is going to stop them from living the Southern California dream. A new buddy comedy for Nickelodeon about two best friend surfer dudes on a never-ending quest for awesomeness.