The eargerly anticipated Jackie Robinson biopic “42,” is the story of a brave young man who became a hero both on and off the field.  The film stars heavy-hitters Harrison Ford, Chadwick Boseman, Jon Bernthal, T.R. Knight, Nicole Beharie and has now cast 10-year-old, child actor Dusan Brown (an HMB favorite!) to play the character “Young Ed Charles.”

Dusan’s mother Joyce Kelly-Brown tells HMB, “His call back was with Director Brian Helgeland, who took home an Academy Award for Best Screenplay for L.A. Confidential (1997).  So we feel special that Dusan was hand-picked by him and can’t wait for Dusan to work with and receive direction from such an experienced filmmaker.”

Brown, who hails from Chicago, Illinois, is a quadruple threat – he acts, sings, dances and is …wait for it…a wrestling champion! This multi-talented youth has guest-starred on several prime time television shows including “How I Met Your Mother,” “Big Bang Theory,” and “Criminal Minds.” He  toured nationally with Disney’s North American Tour of  “The Lion King,” as Young Simba and is one half of the musical duo The Brown Boys; the other half being Dusan’s older brother Dante, a multi-talent in his own right.

The Browns now split their time between Chicago and Los Angeles.  Joyce explains that her husband Tracy Brown, the family business, their home, family and friends are still in Chicago, “…while the boys and I are out here [in Los Angeles] further exploring their dreams of becoming working actors and seeing where God leads us in this journey.”  Fun fact: The Brown boys actually attended school in the same Hyde Park neighborhood where President Barack Obama once resided!

As for formal training, acting classes and coaching, upon the trios arrival to Hollywood in August of 2010, her sons’ agent and manager suggested to Joyce that she not enroll them in any ongoing training, but instead utilize occasional coaching when needed.  Brown said, “They reiterated after I asked again, that ‘They’re fine just how they are… organic, real kids,’ and if they weren’t immediately getting call backs, then we’d consider another plan.” 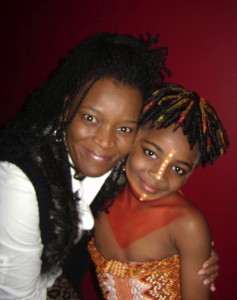 Following the team’s advice, Dusan was coached once for a feature film back in August of 2010 by Eric Stuart before he went out on tour with Disney’s The Lion King.  Dusan, only 9 at the time, toured from December 2010 until July of 2011.  Upon returning to California, he coached for another feature film audition with Carnetta Jones.

Kelly-Brown is a devoted parent and shares, “All else and everything that he’s booked thus far has been as a result of whatever it is that his agents and manager saw in him upon our arrival [to L.A.] and my fine tuning.  I’ve never considered myself their coach, but I guess that’s my title for now, amongst several others, of course… while [my sons] still affectionately think I know everything.”

Both Dusan Brown and his brother Dante are represented theatrically by Coast to Coast Talent Group. Their management is Luber Roklin Entertainment.

Only one number has ever been retired by every team in all of Major League Baseball. This number is 42.  It was, of course, the number of Jackie Robinson (Chadwick Boseman). 42, the film, tells the story of a remarkable man and a remarkable time, when a world war had just been fought to end tyranny, but baseball was still segregated. To Branch Rickey (Harrison Ford), the general manager of the Brooklyn Dodgers, this was an unacceptable situation. Vowing to bring an African-American player into the big leagues, he chose college superstar athlete Jackie Robinson and thereby set into motion a story that would captivate the nation. The film perspective is through Jackie’s eyes as he and his young wife Rachel (Nicole Beharie) travel first to minor league spring training in Florida and subsequently on to the major leagues. Jackie faces racism and scrutiny on the public stage and triumphs in spite of the opposition. In becoming a leader of the Brooklyn Dodgers, he blazes a trail for Hank Aaron, Willie Mays and all the African-American baseball players who came after him. He also was an inspiration to fair minded people everywhere. Last but not least, he thrilled fans of baseball with his hitting, his fielding and his electric style on the base paths. 42 is the story of a brave young man who became a hero both on and off the field. 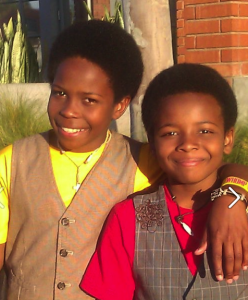 Stars in the making, Dante and Dusan Brown

Legendary Entertainment has successfully partnered with Warner Brothers on The Dark Knight Rises (2012), Jack the Giant Killer (2012), Clash of the Titans & Wrath of the Titans (2012), and Hangover (I & II).  42 is a solo venture for Legendary, as is this portion of their production slate: Godzilla, Warcraft, Seventh Son and Mass Effect.

42 will debut April 12, 2013; timed to coincide with Major League Baseball’s Jackie Robinson Day, held every April 15 to commemorate the date in 1947 when Robinson broke the MLB color barrier by playing his first game with the Brooklyn Dodgers. 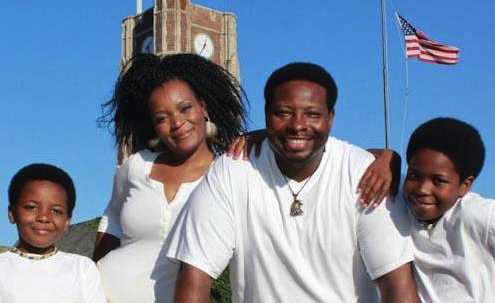 Joyce Kelly-Brown, husband Tracy Brown and their sons Dusan and Dante Brown – Chicago natives who are making it big in Hollywood!