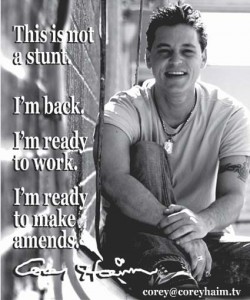 My husband Russell and I worked with Seth Green on a small, teen film called “Can’t Hardly Wait,” back in 1998. While the film wasn’t intended for my demographic and I admittedly appreciated very little of it’s humor, a few actors on the film really stood out.  One of them was Seth Green; an immeasurably talented, funny and unpretentious guy. When I came across this post online quoting Seth about recently deceased former child star Corey Haim, I decided to reprint a small portion and link to the original post on Entertainment Weekly because Seth’s one person in Hollywood who doesn’t appear to have an agenda in discussing Haim’s career and untimely death.

Did you know Corey Haim at all in his younger days?
Seth Green: I met him first when I was probably 14 or 15, and it was the height of [his] success and I was so enamored by kids that were doing what I wanted to do. And then after his career had started to wane and he was doing more “slim-chance-of-release” movies, he did a movie called The Double O Kid and I had a small part in it that which wound up getting cut. [Laughs] Let me think. I was probably like 17 or 18 years old. I was like his buddy driving him to his new job and we’re talking about what the job is, and it’s all exposition. “Really, you’re taking a summer job interning with the CIA? That’s great” or whatever it was. We spent two days together working. We started to shoot one day and he was complaining of stomach pains and eventually wound up leaving and we couldn’t shoot anything that day and I was really upset. I was such a defender of him, and then to show up on-set and then have him sort of act the way people were accusing him of acting was really disheartening. Then like a day or so later, they reset up everything to shoot and he was just immeasurably professional that day. Like just all over the place, working way above and beyond, busting his ass, knew all his lines, was hittin’ his marks really sharp, and elevating it. As much as you could elevate The Double O Kid, elevating it. That’s kind of what he was, was this duality of incredibly sweet and earnest professional who really loved performing and would go above and beyond for the project and his castmates and also this kind of troubled, tortured drug addict that could be an entirely different person depending on where he was with his addiction. But like I said, when we got back to shooting, I was blown away by how awesome he was.

As a fellow child actor, what was the difference between you and Corey Haim?
Seth Green: I was never famous as a kid. [Laughs] That’s the biggest difference between me and any other kid actor is that I wasn’t famous as a kid. I was never specifically associated with a part, I didn’t have tons of money, I wasn’t conventionally tall or handsome, so you know the things that were available to me were hard work and perseverance. I just didn’t have the same opportunities so I wasn’t able to make the same mistakes.

Anything else you wanted to say?
Seth Green: As people get older and fall out of the spotlight, people’s memory of them changes. He was a really sweet and earnest performer, and that came through in everything that he did. Whether it’s Silver Bullet, Lucas, even Lost Boys. He really just loved performing so much and wasn’t cynical. I just hope that people will always remember the kid as somebody who was a really good actor and loved performing and just got caught up. 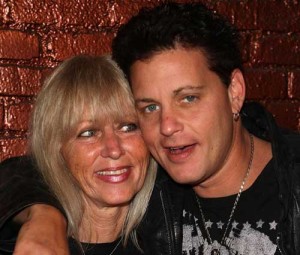 A recent photo of Corey Haim with his mother Judy Haim, also his manager. Corey and Judy were living in the Oakwood Apartments near Universal Studios at the time of his death.

The L.A. Coroner’s Office confirms that Corey Haim’s autopsy was completed March 11, 2010.  According to the chief coroner investigator, “The cause of death has been deferred pending receipt of toxicology and histopathology tests.” The office expects to get results in six to eight weeks.

Access Hollywood, reports that Haim’s mother — Judy Haim — says the coroner’s office called her to disclose the actor’s cause of death. She claims she was told the autopsy found the actor suffered pulmonary congestion, and found he had an enlarged heart and water in his lungs.