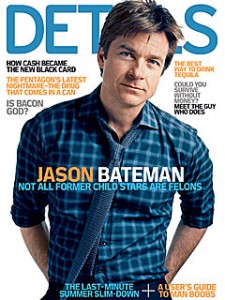 It’s the story Hollywood repeats with every new generation of child actors, the articles you’ve read a hundred times in print and watched on tabloid shows E! True Hollywood Story and The Insider:  Successful child actor loses his way.

In this month’s Details Magazine, Actor Jason Bateman, now 40, reveals that following his success as a child star on the television shows Silver Spoons and The Hogan Family he found himself  lacking in parental supervision but surrounded by money: a lethal combination for many youth in this town.

“It was like Risky Business for 10 years,” Bateman recalls of the 1990’s. “My parents were out of town, they left me a bunch of money, the car and the house and I didn’t know when they were coming home. “

But like Bateman himself, this story has a charming twist. After vanishing from the Hollywood scene for almost a decade,  Bateman has resurfaced as Hollywood’s new (again) It boy. It’s difficult to imagine Jason as anything but the lovable everyman he plays on screen but during his “Risky Business” years, rumors of his drunken antics were well known within the industry. I’ve heard both sides.

In 1996, while I was working on Pleasantville, Justine Bateman came to set, visiting a former flame.  Upon seeing her, one of our actors shared that he had just recently been thrown out of one of her brother Jason’s parties in the Hollywood Hills. The insult added to injury? He was thrown out by Jason himself and for no apparent reason.   Let’s just say, there were hard feelings.

But jump ahead 6 years to 2002, Jason is married, sober and working steadily. After meeting on Starsky & Hutch, my husband Russell approaches Bateman to participate in a video series he was directing about finding success in the film and television industries. Not only did Jason agree to participate but bent over backwards to accommodate Russell and the crew.  No agents, no attitude, no hidden agendas & for no money – just a genuinely nice person going out of his way to help an acquaintance.

Following his return to television with the critically acclaimed Arrested Development, Bateman worked a multitude of supporting roles in feature films: The Sweetest Thing, Dodgeball, Starsky & Hutch, JUNO, and The Break-up – to name just a few. Recently his film roles have grown from prominent (Hancock) to leading man as in the upcoming Baster co-starring Jennifer Aniston and the star-studded Couples Retreat (picture below) coincidentally helmed by another former child actor,  Peter Billingsley. And the best part of this come-back kids journey?  He deserves this moment. Jason Bateman is a genuinely nice person with talent and good looks to spare – unlike many in the spotlight, he warrants the praise that’s lavished upon him and the many accolades that are sure to come.  For more read the new article in Details. 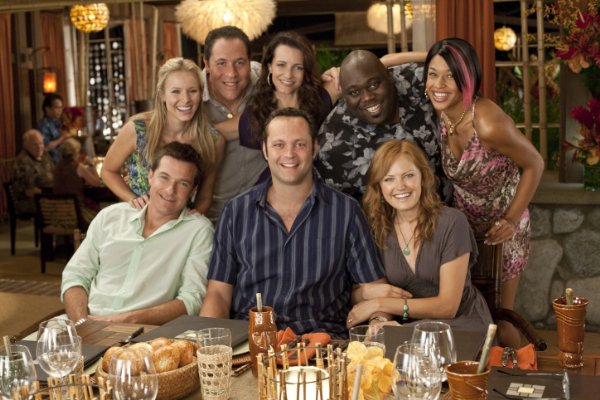