The Actors Fund’s Looking Ahead Program at Nickelodeon Studios’ Pic@NIC: A Day of Fun in the Sun for Our Child Actors!

You are here:Home-CHILD STAR STYLE, Screenings, Parties & Union Events, THE BUZZ-The Actors Fund’s Looking Ahead Program at Nickelodeon Studios’ Pic@NIC: A Day of Fun in the Sun for Our Child Actors!
Previous Next

The Actors Fund’s Looking Ahead Program at Nickelodeon Studios’ Pic@NIC: A Day of Fun in the Sun for Our Child Actors! 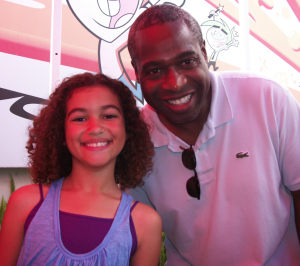 My daughter (child actor Damoni Burkhardt) and I attended the pic@Nick event on Sunday, May 1, 2011 hosted by The Actors Fund’s Looking Ahead Program at Nickelodeon Studios.  Looking Ahead is a program of The Actors Fund which is dedicated to helping professional young performers between the ages of 9-18 and their families manage the unique challenges associated with working in the entertainment industry.

It was a great event, with perfect weather. Everyone was so nice and everything was free, something you don’t find often in this business!  There was unlimited cotton candy , candy, snacks and drinks; sandwiches and chips were provides by Corner Bakeryand drinks by Coca Cola.  Cartoon Sketch artists drew cartoons of each child, while others opted for the temporary tattoo table, rock wall, sumo wresting pit and carnival games.  It was a day for kids to be kids and that is so very important for our young performers. 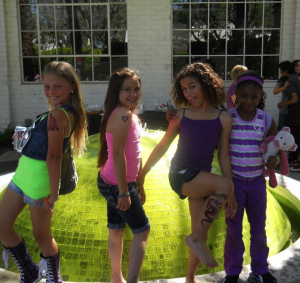 Former “Wonder Years” Child Star and now television director Fred Savage (Former Young Performer and Advisory Chair of Looking Ahead) was the event moderator.  There was a celebrity panel that included Sara Gilbert (Darlene from “Roseanne”), Patrick Labyorteaux (JAG), Phill Lewis (Mr.Moseby on “Suite Life On Deck”) and Jaleel White (Steve Urkel on “Family Matters”).  They all had great advice for the young performers and their parents on the well known ups and downs of acting. The panel spoke about the “luck of the game,” and to not ignore the signs along the way that might take your career in a different direction. The panel also advised that kids get involved in other activities and develop other skills outside of their acting endeavors.

Jaleel White spoke about moving on to the next audition after not being chosen for a part that you really wanted. He told a wonderful story about going through the long and arduous process of the audition, the callbacks, the holds and was up for the coveted role of  “Rudy” on the iconic 80’s television series, “The Cosby Show.”  He was very excited about the role, which was given to the girl right in front of him!  White was devastated. Needless to say, he moved on and later nabbed the role of a lifetime as the character of Steve Urkel in “Family Matters.”  When asked by Fred Savage if there was one piece of advice that you could give to the young performers and their families Jaleel said “Watch how you treat people.”  Excellent advice we should all abide by and everyone on the celebrity panel agreed wholeheartedly.  We are so happy to have attended Pic@NIC and excited about being involved in The Actors Fund‘s Looking Ahead program!