You are here:Home-CHILD ACTORS, In the News, THE BUZZ-Former Child Actor Daniela Bobadilla, 18, to play Sheen’s 13-year-old daughter in ANGER MANAGEMENT
Previous Next 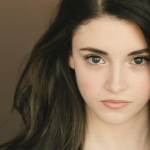 For all the 12, 13 and 14 year old girls who auditioned last week for Charlie Sheen’s new FX comedy series, Anger Management, (my own included by the way) the bad news is: someone else got the job. The  other news is: they cast 18 to play younger – which you could kind of guess would be the case based on the scripted material – hilarious but very mature.

According to DeadlineHollywood.com,  they’ve cast Daniela Bobadilla age 18, to play Sheen’s 13-year-old daughter Emma. Per IMDB, Bobadilla was born in Mexico City, Mexico on April 4, 1993.  She has been acting professionally since approximately 2009 and has appeared on TV shows Lie to Me, Oliver’s Ghost, Bucket and Skinner’s Epic Adventures amongst others. I just happened to catch her last week in a touching albeit brief portrayal of a young molestation victim on Desperate Housewives.

Wikipedia notes that Daniela was introduced to theatre in her middle school at age 11, and became involved in musical theatre. She has participated in over 17 theatre productions including Fiddler on the Roof (Chava), High School Musical (Gabriella Montez) and Wizard of Oz (Dorothy).

She was allegedly discovered by a Canadian talent Agent in a showcase acting class and immediately began auditioning for television and film. In 2008, she was discovered by Mexican/American comedian George Lopez who cast her as his daughter in “Mr. Troop Mom.” 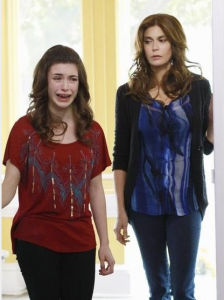 Daniela Bobadilla as a molestation victim on “Desperate Housewives.”

In the anticipated Anger Management series Sheen portrays “Charlie,” a former baseball player with anger issues who winds up as an unconventional anger management therapist. The other leads in the series as confirmed earlier are Charlie’s therapist (Selma Blair), his ex-wife (Shawnee Smith) and his 13-year-old daughter (Bobadilla). Bobadilla, is repped by ICM and the Michael Abrams Group, and currently recurs on NBC’s midseason drama Awake.

The series will begin shooting in March, for a June 2012 debut on FX.