Donation cost to help change lives? Only $25.
Opportunity to build a house alongside Nolan Gould? Priceless! 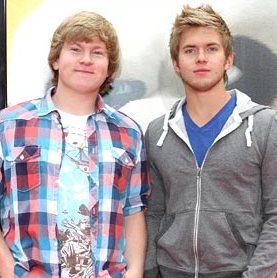 In addition to helping build ten homes (WOW!) volunteers will create a new neighborhood playground and participate in a home dedication ceremony where 14 fortunate families will receive the keys to their new homes. Participation in Youth Build is limited to 300 teen volunteers. YOUTH Build is open to kids ages 9 and older. Registration is suggested at $25 (feel free to donate more!) and participants are asking their friends and family to sponsor them. You can also choose to sponsor Team Doug, Team Chris or any of the other star supporters by going to the website and clicking on your favorite celebrity’s name. You can even form your own team!  All the money raised will be used to build a Youth United home at the Pacoima site.

“We believe it is important to connect with young people in a way that instills and nurtures the broad concept of community service.  We also are committed to spreading the word that advocacy is a lifetime habit that can be both fulfilling and fun,” said Habitat for Humanity San Fernando/Santa Clarita Valleys CEO Donna Deutchman.

Nolan Gould & Ariel Winter Pitching in for Habitat for Humanity

The San Fernando Habitat for Humanity affiliate has been piloting a new “Enriched Neighborhood Model” at its Pacoima site bringing social and educational services in addition to homeowner programs such as repair and money management. A recent survey conducted with families from the first phases of the project shows this model is quite successful. While only 18 percent Pacoima area high school students graduate, in Habitat’s planned community the children have a 100 percent high school graduation rate with 92 percent attending or having graduated from college or a trade school, and with over 50 percent graduating from a four year university. Many adults have also gone on to college and within 3 1/2 years of moving in Habitat Pacoima families have reported an average 14 percent increase in income.

Your child actor can join in the fun with only a mere $25 registration donation – but hurry spaces are extremely limited!  Imagine. To register today call (818) 884-8808 or visit www.HumanityCA.com