You are here:Home-LEGAL, THE BUZZ-SAG-AFTRA Merger Referendum Approved – Now One Union!
Previous Next 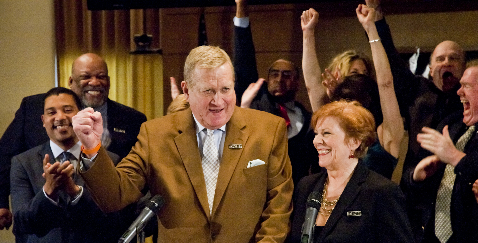 As of Friday, March 30, 2012, the members of SAG and AFTRA have voted to merge their unions after two previous failed attempts. SAG-AFTRA national co-presidents Ken Howard and Roberta Reardon (pictured above) announced the merger at 1:35 p.m. PT via live stream at the organization’s, (called SAG-AFTRA) new website: http://www.sagaftra.org/  Approximately 55,000 SAG ballots and 37,500 AFTRA ballots were returned and the vote on the SAG side was 82 percent pro merger  and 86 percent pro merger among AFTRA members.  Approval by AFTRA members was expected as they voted for the merger back in the 1998-99 and 2003 attempts. SAG members have historically voted the merger down however.

According to the new website, the reasons for the merger of the 2 unions are as follows:

– One union will increase our bargaining leverage. SAG and AFTRA members of all categories largely work for the same employers — the handful of multinational corporations that control the entertainment and media industries. The employers divide our work in several areas, making it more difficult for the unions to negotiate from a position of maximum strength. This also leaves us vulnerable to the dangerous possibility of competitive negotiations. Forming a single union ensures that we cannot be divided in our work or negotiations, and that our employers have just one place to get the skilled union talent they need.

– One union will improve our ability to organize. The presence of non-union work is growing in both large and small markets, especially in the areas of commercials, industrials, interactive games, new media, cable news and local and national radio and television broadcasting. One union puts us in the best position to fight the spread of non-union work. By focusing our resources and implementing a unified strategy, we can work more effectively to turn non-union work into union jobs for members.

– One union will help protect health and pension/retirement benefits. One union will increase our bargaining strength, and bargaining strength determines the amount our employers pay to fund the benefit plans members rely on. Also, better organizing results would put more work under union contracts, increasing total plan contributions. For these reasons, one union puts us in the best position to maintain or improve benefit levels. Forming one union is also a necessary first step in determining how AFTRA H&R and SAG P&H trustees might work together to create a single plan — one toward which ALL your covered earnings could be directed, helping you qualify for crucial benefits.

– One union can better protect our future. The entertainment and media industries are changing rapidly – our work is being created, distributed and consumed in ways that weren’t imaginable when SAG and AFTRA were founded. Forming one union now gives us an invaluable opportunity to build an organization that not only retains our best capabilities, but also gives us the greatest capacity to take on the challenges of the future. A comprehensive, unified strategy is required to respond powerfully to technology-driven change in the industry.