Blake Lively’s Mom Is a Manager But She’s No Momager.

Blake Lively’s Mom Is a Manager But She’s No Momager.

Blake Lively, a 23-year-old actress best known as Upper East Side princess Serena Van Der Woodsen on the television hit Gossip Girl, is grateful to her Mother Elaine Lively but not for the typical reasons you might think.According to the British edition of OK Magazine, while Blake’s mommy is indeed a Hollywood manager, she has never asked to manage her own daughter’s career or attempted to use her child for personal or monetary gain. Unlike many other Hollywood Moms and Dads, Elaine has successfully avoided what we all know as the Momager Trap.

Blake expresses her gratitude that mom has kept business and family separate.  Elaine “stayed out [of my career].  All my siblings were in this business [sic] but she was like, ‘No, I don’t think business and family mix.’” Blake’s big break came in her junior year of highschool when she won a role in “The Sisterhood of the Traveling Pants.”

“I think that’s so remarkable because so many mothers just love to get in and be a part of it and the financial benefits. They take a commission of your money, and I think you should be able to give them what you want rather than be obliged to pay your mother. It just seems really strange, like rent.” 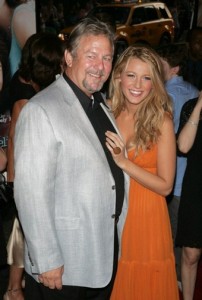 Blake’s father Ernie Lively (Criminal Minds) and siblings (Eric Lively, Lori Lively, Jason Lively and Robyn Lively) are all actors. Blake’s parents encouraged all their children to follow in their footsteps, but Lively declined for many years until she was “forced” to go to her first audition in her late teens.

“Because my family was in the business, acting was the last thing I wanted to go into. I worked my whole life to get into university, then went to an audition in my junior year because my brother made me. And once I did it I realized I loved acting.”