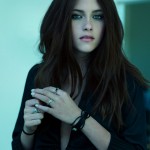 Kristen Stewart and her mother Jules are friends of my husband Russell and also happen to live in our neighborhood.  He’s worked with both mother and daughter on separate film projects: Kristen as an actress on “Zathura” and Jules as script supervisor on “The Flinstones in Viva Rock Vegas,” and “The Flintstones.” Jules has apparently moved on to directing now and Kristen, as we all know, has moved on to superstardom.

While I haven’t met Jules, I have met Kristen.  For the record, not only is she one of the best actresses of her generation, she’s absolutely breath-taking in a way that no one has yet captured on film.  It’s clear to all of us that she’s a child actor who is transitioning to “actor” with ease.  I hope to interview Hollywood Mom Jules at some point to learn how she went about supporting and nurturing her daughter’s career so beautifully.  In the mean time, Celebrity Profile Examiner contributing writer Andy Williamson profiles Kristen Stewart this month.  I won’t bother paraphrasing because Williamson does a great job of covering the nuts and bolts of her career thus far.