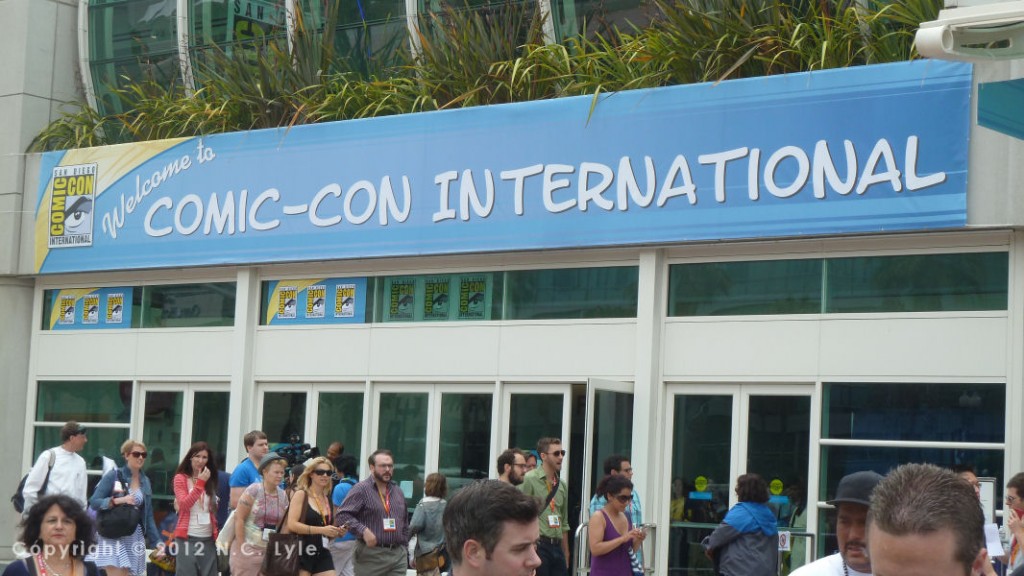 I had a William Thacker moment the other day.  You know who he is, right?  He’s thecharacter played by Hugh Grant in the romantic comedy Notting Hill.  In the film, Thacker is mistaken as a journalistat a press junket and in a panic he says he is from “Horse & Hound Magazine.”  Well, that was me (sort of) at a press junket for “The Twilight Saga: Breaking Dawn Part Two” at San Diego’s Comic-Con held at the Bayfront Hilton Hotel this past weekend.  I was asked to fill in for someone who couldn’t make the press conference, to interview the entire Cullen Clan with a special focus on the youngest Cullen played byMackenzie Foy.  It’s a tough life, I know,  but someone has to do it. 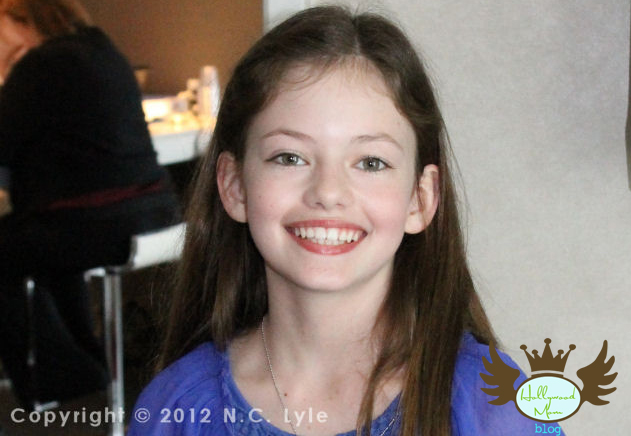 The press conference was running a little behind schedule and Summit Entertainment was kind enough to provide pastries and drinks for the press.  According to my schedule Stephenie Meyer, Mackenzie Foy, Taylor Lautner, Robert Pattinson and Kristen Stewart were scheduled to start the conference but instead cast members Elizabeth Reaser, Jackson Rathbone, Ashley Greene, Peter Facinelli, Kellan Lutz, and Nikki Reed were the first up to the podium.

Each actor spoke briefly about their different experiences on set. One of the first questions asked regarded the different set props they may have kept after filming. Ashley Greene took her Alice Cullen necklace; Elizabeth Reaser recalled a lot of hugs, screaming, laughing and then the feeling of, “What do we do now?!” Peter Facinelli, the jokester on the panel, responded, “I miss the woods [and]  I miss my contact lenses.”

For the second half of the press conference, Twilight author Stephenie Meyer, newcomer Mackenzie Foy, and lead actors Taylor, Robert and Kristen sat down to discuss their final moments as the iconic characters in Meyer’s blockbuster franchise, “The Twilight Saga.”  Meyer was asked about meeting the cast for the first time. She recalled them being in full wardrobe and finding it similar to meeting “imaginary friends.”  Stewart spoke like the incarnate of a sixties hippy, “Sometimes you meet people and you’re like, ‘We should make stuff together. We can do good.’”  Pattinson struggled to answer most of the questions directed at him and for whatever reason, couldn’t figure out how to talk into the microphone.  He was asked what similarities exist between himself and Edward, to which he responded, “I can’t really tell anymore.” 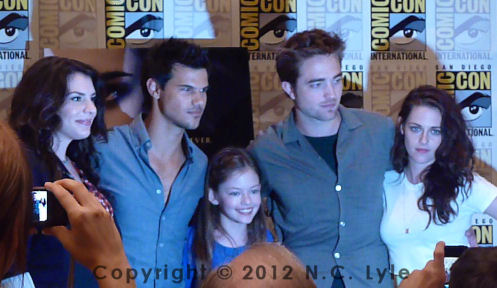 Journalists  waited until the end of the press conference to hear Mackenzie speak, answering the last question of the day,“Is there one particular personal memory that they’ll take away from this?”  Foy stated: “Every moment was exactly perfect. Every moment was a thing I will cherish forever.”

In conclusion, the cast was asked which particular memory they would take away from the Twilight Saga experience. Stephenie Meyer shared that her favorite moment was a gathering in a garage, the warmest room in the Cullen house when they all just all hung out together. Kristen Stewart loved filming the wedding scene and Taylor Lautner said he tried to soak up every moment because he knew that once  it ended he’d want to go back in time and do it all over again.  Pattinson’s favorite moment was horsing around in the water in Brazil.

Following the conference, writers met at a roundtable with Mackenzie Foy, the lucky, young actress cast as Renesmee Cullen–the half human-half vampire child of Bella and Edward Cullen played by Stewart and Pattinson, respectively. We learn that Foy’s character has also been “imprinted” by Twilight werewolf Taylor Lautner. Mackenzie is an ethereal little girl, poised and professional beyond her years.  She is also about to become a household name. 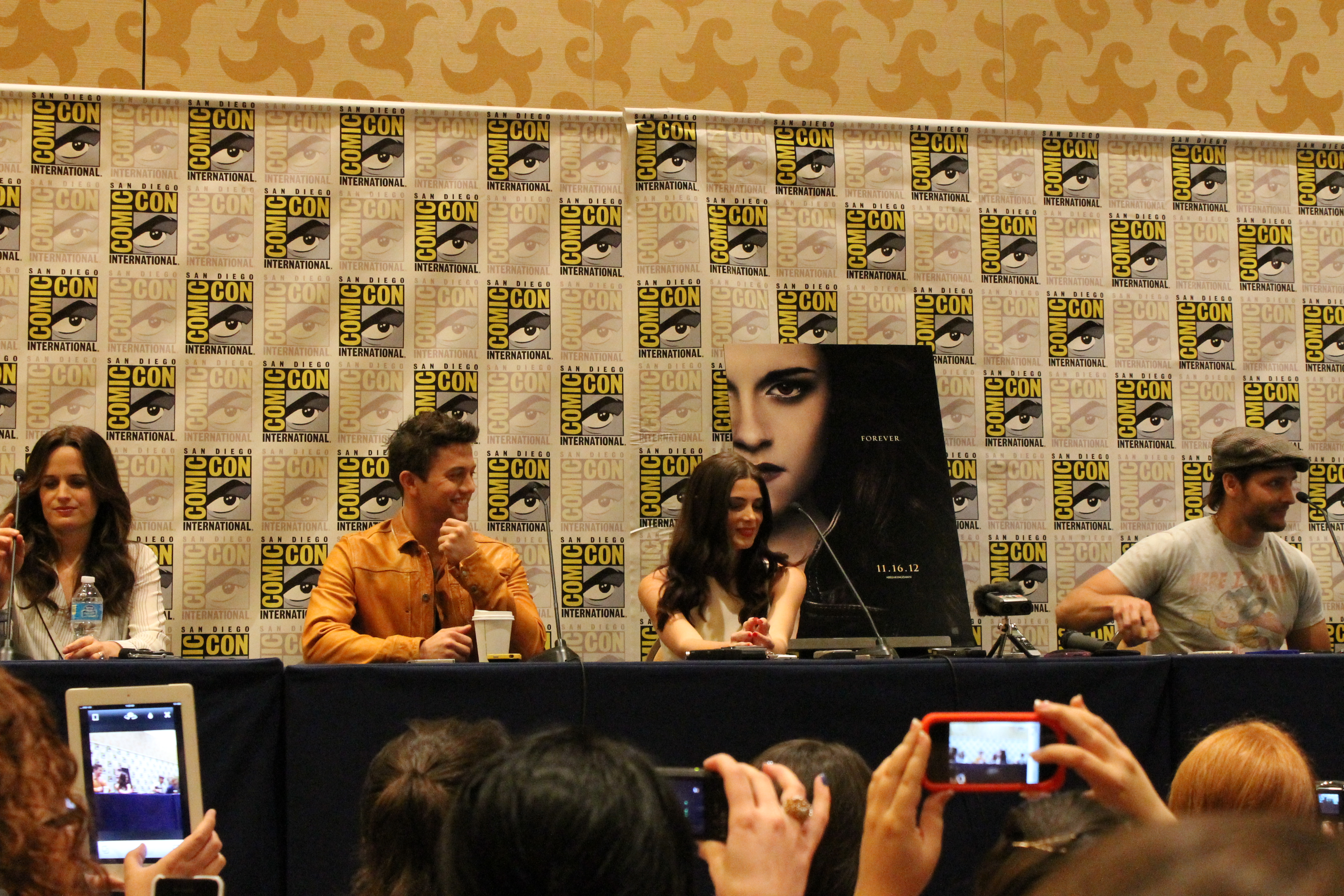 So just how did she become Renesmee Cullen?

According to Entertainment Weekly, Foy is from the greater Los Angeles area and has been working since the age of three when she began her career in show biz  modeling for Ralph Lauren. She has also appeared in commercials and on TV shows Til Death, Hawaii Five-O, and Flashforward.

According to Mackenzie, auditioning for the role of Renesmee was like any other audition. “You do the audition then you go home. Then you get a callback. Then you have to wait to see if you got it,” Mackenzie said.   Foy felt confident that she had a  good chance of landing the role.  The popularity of the Twilight franchise has catapulted it’s cast members into super stardom and this will likely apply to Mackenzie as well once the film releases on November 16, 2012.

Director Bill Condon told Entertainment Weekly that he spotted Mackenzie early in the audition process. “It was one of those rare times when you see something — like with an apartment or house — and it feels good and you just need to take it. I felt that way, like, ‘Oh, this is good.’”

Foy is homeschooled and recently completed fifth grade.  She is already recognized occasionally out in public, sharing  “I got recognized at the mall once.”Foy said she hasn’t read the Twilight books because she’s too young; however, she has watched the first two films in the franchise.

She all ready has several fan sites dedicated to her and she has her own team – Team Renesmee – which is very exciting stuff for an 11 year old.  What’s even more exciting is the hint of Renesmee’s own spin-off from the Twilight franchise.  We’ll have to wait and see if the Saga will continue.

Mackenzie’s upcoming film projects include The Conjuring (2013) and Plastic Jesus (2012).  She is represented by Coast to Coast Talent Group and her manager Christopher Rockwell at Keyword Entertainment.

In an interview with the Huffington Post, 11 year old Mackenzie revealed some set secrets like “the swear jar,” which Stephenie Meyer and Taylor Lautner proudly did not need to contribute to:

What was your audition like? I’m assuming a lot of people wanted this role.
Actually, it was just a regular audition. You say your lines, you do your audition, you go home. And then you get a callback and you wait and see if you got it.

Did you feel confident?
I did. I kind of felt like, “I think I might have a good chance of getting this.”

So, for you, there was no difference between “Twilight” and any other audition?
I was excited because “Twilight” is a very good movie.

You see how famous everyone else in these movies have become. Like we were talking about earlier, will it be weird when you’re waling down the street and people recognize you?
It’s happened to me a little bit …

But I feel it’s going to increase.
It might. I don’t know.

Everyone else is finishing up, but you’re just starting. Was it difficult to start on a series where the actors have so much camaraderie?
No. Everyone was really nice and they were really sweet about welcoming me to the cast. They were like, “Hi, welcome to ‘Twilight.'” And I’m like, “Thank you.”

That sounds nice.
They were really sweet.

At the press conference, Stephenie Meyer teased you about a “swear jar.”
Oh, the swear jar [laughs]. On set, there are bad words going on. And one of my co-actors was like, “You should start a swear jar — there are some bad words going on here.” I was like, “All right.” So, I started a swear jar and we decorated the whole thing. It was two dollars for a minor bad word and it was three dollars for the really bad words.

Who was fined the most?
Well … I don’t want to get anybody in trouble.

Continue reading this interview in it’s entirety at The Huffington Post.

For video of the Comic Con press conference MTV NEWS, Access Hollywood and TwilightMoms.com seem to have all aspects covered!

As for me, I kinda loved my William Thacker moment.  It was fun to hang out with journalists from all over the world and get to know the cast members a little better. Summit Entertainment’s marketing and PR staff were absolutely brilliant. I might have to try and get another gig like this again.  I know! The Breaking Dawn 2 Premiere—I’m totally free that day. Call me! 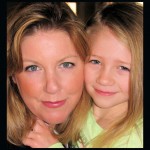 Nyna Lyle is a Contributing Writer & Photographer for HMB and  Hollywood Mom to child star on the rise Emma Rayne Lyle.