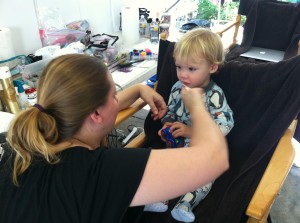 Cash in hair and make-up at the Carter’s Shoot.

When we auditioned for a Carter’s Holiday print job on Saturday (during Carmageddon weekend no less), I knew the shoot was scheduled for the following Monday, Tuesday and Wednesday.  So by Tuesday evening, it was safe to say that I’d given up hope of Cash booking it at all and was mentally ‘on to the next.’  As I putzed around Tuesday night, cleaning toys up off the floor and dinner off the walls (yes, you read that right), I thought it was a little strange for my phone to ring at 9:45 pm.  As a leasing agent though, I receive about 10-20 calls/day from unfamiliar numbers.  This call, I assumed, was just another apartment inquiry, albeit an uncharacteristically, and might I add presumptuous, late night call, even in the world of apartment rentals.  Twenty minutes later, I decided to check the voice mail… and there it was. The Call!

My son Cash was being called in at the last minute for the Carter’s Holiday shoot and could we be there at 1:30 p.m. the next day? Of course we could!  I was thrilled!  I quickly ran in to tell my husband and then shot over to the computer to email my boss, telling him.. er.. asking him about taking a half day the next day.  Finally, after 18 months, Cash had booked his first paying gig.

The shoot was conveniently about 15 minutes from our house.  So I ran home after working in the morning, scooped my lil’ dude up, changed his clothes, grabbed his work permit and we were out the door.  Although, he did have just enough time to play with my keys for exactly one minute before falling directly on top of them, leaving a giant red mark on his cheek.  Oh well, hair and makeup worked wonders.  We had to wait to be shuttled up to the private location which actually worked out well because he was able to sneak in a good 45 minute nap between the ride and the waiting.  Sleepy babies = cranky babies = no pictures, please!

Upon arriving, we found out that Cash was the backup model for his clothing size. Bummer. But, I remembered our agent saying that backups are almost always used as primaries.  All was not lost!  An adorable little boy named Gabriel and Cash were dressed in the same Christmas outfit.  Gabriel went into shoot while we waited patiently and settled in to watch Dino Dan.  Approximately 30 seconds later, I heard the sound of a boy protesting quite loudly.  I have no shame in admitting that the first thought in my head was, “Ooh, I hope that’s Gabriel!” Because if Gabriel had no interest in having his picture taken, then that meant we were in.  Sure enough, Gabriel came right off the set and in went Mr. Cash.  Score! (Sorry, Gabriel’s mom, I know you understand!)

My initial instinct was to just step back and let him go with the staff, so I did.  And honestly, I think it was the best thing I could have done.  Because  HE. DID. AWESOME!  I am fairly certain that if I had been in view, he would have thrown his little tantrums, cried for mama and tried to run towards me – all very typical actions of any 18 month old boy.  But because he was surrounded by a new group of people who were completely interested in him and seemingly thrilled by his every smile, he just shined.

It was so rewarding to have him handed back to me and hear, “Wow, he really did great.”  They even put him in a second outfit and used him for a pajama group shot.  I couldn’t have been happier with the day’s outcome and now I will wait patiently to see if and where his images will be used for the Holiday season.  All in all – not bad for a “backup!”

HMB Writer/Reviewer Michele Dahl is mom of pint-sized models Shelby and Cash Dahl. You can follow her on Twitter too at @Elle_Renee