You are here:Home-CHILD ACTORS, Child Stars, Momagers in the News, New talent, Parents of Child Actors, THE BUZZ-Funny People: Judd Apatow & Leslie Mann on Their Child Actors Iris and Maude Apatow
Previous Next 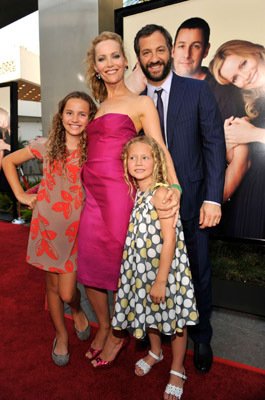 “Funny People” star Leslie Mann reveals that while her children Iris and Maude have appeared in some of the movies she has made with her husband Judd Apatow the kids are not actually allowed to *watch* the films.

“They can’t see the movies and their friends can’t,” Leslie explains. “It’s not on their radar at all.”

[Editors note: This is a scenario I can completely relate to as my daughter Jordan’s first scene was in the hilarious but very R-rated, “The Hangover.” She hasn’t seen it and hopefully none of her friends have!]

Leslie shared that she and Judd were worried about the parents of their children’s friends seeing some of their movies such as ‘Knocked Up,’ and ‘Pineapple Express’ and getting the wrong idea about their family.

“Kids’ parents see the movies, and I always worry because I don’t want them to think that we’re some pot smoking family. [But] they actually like the movies a lot, and now they confide in me about their pot smoking ways.”

Q. [Regarding] your children, explain why you decided to exploit them by making them work in this movie [Funny People]?

Leslie:(laughs) That wasn’t me. That was Judd tricking me into using them. That’s not something I wanted to do.

Q. They’re very professional. How did they get to be such good little actors?

Leslie: They don’t have any clue as to what’s happening so they’re very natural. They were usually in eating scenes so we put food in front of them and rolled three cameras. Their friends can’t see the movie, and they can’t see the movie, so it’s totally off their radar. It’s like hanging out with mom and dad.

Q. Is it awkward for you to work with your husband and kids?

Leslie: It’s not awkward. If it had been with another director, it might have been awkward, but then I wouldn’t have done it. Besides, Maud’s probably done with it now. I don’t want her to be a child actor. 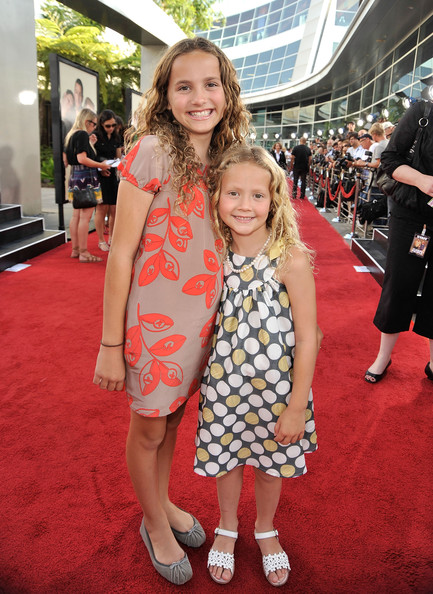 Judd Apatow on Hiring His Own Kids for Knocked Up:

“It was definitely my choice [to put them in the film]. I just thought that whenever you see kids in movies they always feel scripted and stiff. And if I had my kids there with us, they would act like normal children and do things that kids don’t do because my kids do all sorts of weird things. They’re really funny and then they’re pissed off, and then they’re suddenly happy again and there’s violent mood swings all day long. There’s a potential for violence and then they just kiss you hard. I thought if I could capture any bit of that, it would show people what being a parent is actually about.

I was nervous about [using them] because I thought if this doesn’t go well it could be a disaster. ‘I’ve already ended their acting careers.’ I said, ‘Your acting career ends Friday at six o’clock.’  But, you know, I thought it could really be a disaster if they refused to do it. They could show up at work and say, ‘I want to go home…’ and then I’m a lunatic if I don’t let them.”

Apatow concedes that it helps that mom [Leslie Mann] is on the set too. “Yeah, she’s acting with her mom and I’m right there. If her mom goes, ‘What do you want for breakfast?’ and she just answers and forgets the cameras are there, you really see the kind of conversations that they have. It’s funny and sweet and very weird at times. And they’ve gotten good at improvising, which is somewhat shocking. Or I can feed them lines and they will repeat them. I said to Iris, it’s true, I said, ‘After Seth walks away, turn to Paul Rudd and say he looks like Winnie the Pooh.’ She just turned and went, ‘He looks like Winnie the Pooh,’ without missing a beat.

Maude went on a rant yesterday in a scene how she thinks babies are born. I said, ‘Say whatever you want, Maude.’ And she went into this really long, bizarre explanation about storks have these eggs that are invisible and they go through your head and they go into your stomach and you push your bellybutton and your butt falls off and it falls out your butt. It goes in the dirt and you dig it out and you hit it with a hammer and then [there’s a] little tiny bird baby and it’s already wearing clothes. She was just going and going.”