Hollywood Mom Blog Readers Are Invited to a Complimentary Pre-Screening of DINO TIME in 3D!

You are here:Home-CHILD STAR STYLE, Screenings, Parties & Union Events, THE BUZZ-Hollywood Mom Blog Readers Are Invited to a Complimentary Pre-Screening of DINO TIME in 3D!
Previous Next

Hollywood Mom Blog Readers Are Invited to a Complimentary Pre-Screening of DINO TIME in 3D!

Hey Hollywood Moms and Dads! There is a great film coming out early December that HMB would love to have all of you attend NOW! Clarius Entertainment presents DINO TIME and you’re invited to attend a pre-screening of this animated family film on Tuesday, November 13, 2012. Hollywood Mom Blog readers can go to www.gofobo.com/rsvp to download their free tickets with the code: LAMOMS41RL.  It’s a really great family film and we’d love for everyone to have the opportunity to see it early!

Let’s all meet up afterwards in the lobby for another great Hollywood Mom Photo Opp! xo HM

Here are the details! 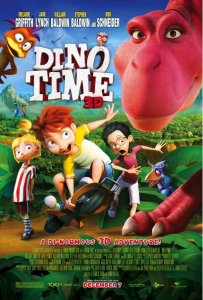 About DINO TIME!
When three children find an egg-shaped time machine, their curiosity gets the better of them. They accidentally turn the contraption on and find themselves millions of years in the past. What’s more, they’ve landed right in the middle of a dinosaur’s nest of eggs, and the mother T-Rex is right there staring at them. Fortunately for the children, she thinks they’re family, not food. However, they only have until the real eggs hatch to find a way back to their own time.