You are here:Home-Momagers in the News, Parents of Child Actors, THE BUZZ-MOMAGERS IN THE NEWS: NZ Fans Trample Justin Bieber’s Mom?
Previous Next 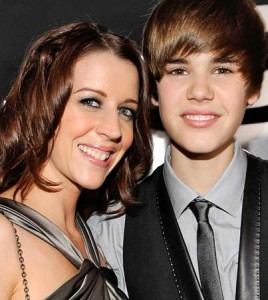 Teen musician and heart throb Justin Bieber touched down in Auckland, NZ last night and was immediately surrounded by 500 crazed fans, which began a mini riot of sorts.

According to Justin’s Bieber’s twitter: “Finally got to New Zealand last night. The airport was crazy. Not happy that someone stole my hat and knocked down my mama. Come on people…” Yes, it’s true, Justin’s mother Pattie Mallette was knocked over by over zealous tweens trying to worship her offspring.

Later joking that he’s the “most dangerous creature” in the country, Justin told his twitter followers that he wants “to sign and take pics and meet my fans but if you are all pushing security won’t let me. Let’s keep it safe and have fun.”

The 16-year old’s mother had this to say about the incident “Thanks for all ur support!! I’m ok thank you!!! On my way to bungy jumping!!! Whoopeeeee :)”

One can only assume she’s none the worse for wear if she’s now willing to jump off a cliff tied to a rubber rope.  Or, maybe she’s just had enough of Bieber Mania and this is her attempt to end it all.  All kidding aside, Mallette may qualify for “momager of the year” based on resilancy alone.  And for those of you concerned with the theft portion of this incident, Justin got his hat back too.