From the Momager Trenches United Kingdom: “How it All Got Started”

From the Momager Trenches United Kingdom: “How it All Got Started”

Jemima Laing (a Plymouth, UK Native) tells us how her son Felix Soper, now 13, was first bitten by the acting bug after landing a part in a theatre production of Peter Pan.

What got Felix started with this whole acting thing was, basically, my innate nosiness.

Collecting him and a friend from drama group on a wintry Plymouth night four years ago, I noticed the friend was clutching a piece of paper which Felix didn’t have.

Questioning the pair, Felix simply replied: “It’s about auditions for the panto Mum, I don’t want to be in the panto.”

Having spent my university years as a dresser at the city’s Theatre Royal, I knew enough to concur that, given his singular lack of singing and dancing ability, panto, that uniquely British institution, really wasn’t for him.

But I still wanted to read that piece of paper.

So as I deposited his pal outside his house I niftily wrested the sheet from him and gave it a quick scan.

Yes, there were auditions for the babes’ roles but, as the production was Peter Pan, the director was also looking for boys to play the speaking parts of the Darling boys.

The prospect of messing about on a pretend pirate ship, being hoisted some 20 feet off the ground every other night and twice on a Saturday, with the added bonus of missing a fair bit of school was like catnip to an eight-year-old ; Felix decided he might actually like to have a go.

So my father was roped in to give up the following Saturday to take him to the audition and to the surprise of us all – not least Felix – by the end of the day he had landed the role of Michael Darling, (a swiftness of timescale from initial audition to confirmation of role we have not encountered since).

So Pizza Express, our default destination for celebrating good family news, was duly visited, licences were sorted, costume fittings were arranged and a normal family Christmas holiday period of a fortnight of eating and precious little else was willingly jettisoned in favour of the demanding theatre schedule.

At his first night I found it impossible to believe my titchy boy would really be able to remember his lines and hold his own on that enormous stage in front of more than 1,000 people.

But hold his own he did, even when suspended a heart-stopping number of metres above the stage on his way to Neverland. 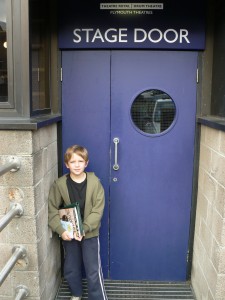 “What I will say is that an ability to remain consistently a precise half beat behind everyone else is a criminally underrated skill, there really ought to be a box for it on the Spotlight form.”

The sole saving grace of seeing my firstborn dangling from a great height was that his precarious position prevented him from attempting the impossibly intricate dance routine taking place below.

On his return to terra firma a tiny bit of dancing was required in each show, but we try not to talk about that.

What I will say is that an ability to remain consistently a precise half beat behind everyone else is a criminally underrated skill, there really ought to be a box for it on the Spotlight form.

Unfancy footwork aside, he really enjoyed himself during the two-month run, even the drubbing he was quite rightly given by a chaperone for an unscheduled ad lib didn’t put him off.

I ticked him off for his antics too while secretly marvelling at his nerve, especially when Paul Nicholas, who was playing Captain Hook, decided to keep the off-piste contribution in the show.

And while he wasn’t bereft when it ended it was clear he had relished the experience.

There was general agreement in the family that he might have some talent and we decided we should try to find ways to let him do something similar in the future.

As opportunities for acting in our neck of the woods on the south Devon coast are pretty few and far between, I approached a couple of agencies in London on the off-chance.

To our amazement one offered to take him on and we clambered aboard that figurative rollercoaster on which all other parents of performing children are fellow passengers.

This metaphorical fairground ride has taken Felix all over the place during the past four years, most recently a part in feature film The Awakening which opened in cinemas earlier this month.

(You can read my account of seeing Felix on the screen for the first time here bit.ly/tZUlhg )

When I told Felix (who has been reading up on chaos theory) I was writing this article it was he who reminded me about the piece of paper his friend brought out of the drama class, murmuring mysteriously: “A butterfly’s wings, Mum. A butterfly’s wings”.

And while what has happened since is hardly akin to the unwitting creation of a tornado, that single piece of paper – which only my propensity for prying ensured I had sight of – has set us on a path which is proving interesting, thrilling, occasionally disappointing but most of all really good fun; yep, so far we’re all enjoying the ride.

Jemima Laing is a Plymouth-based ex-solicitor and former BBC journalist. She is now a freelance writer and Hollywood Mom of  13-year-old son, Felix Soper. You can find her work published on www.spotlight.com. Learn more about her  ( she was a child actor too!) and her writing at www.jemimalaing.co.uk