I was able to attend The Hunger Games World Premiere in Los Angeles last week, which wasn’t only a great night but proved to be helpful insight for my (group) phone interview with Hunger Games Producer Nina Jacobson (Diary of a Wimpy Kid, One Day) this morning. More about the Premiere later. 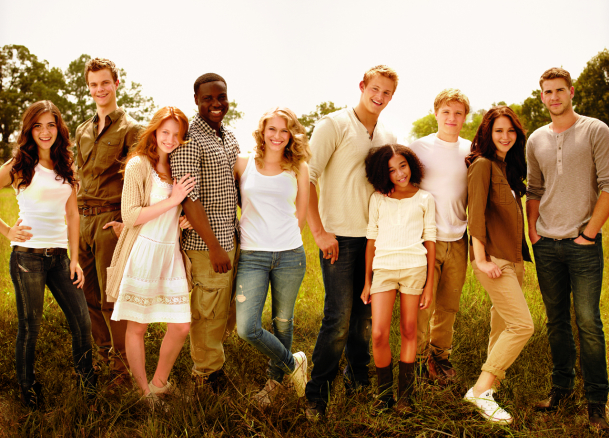 The talented young cast of “The Hunger Games,” in a recent Vanity Fair shoot, “have their feet on the ground,” says Producer Nina Jacobson.

For those not familiar with Ms. Jacobson’s career, she’s one of a handful of powerful women (including Sherry Lansing and Dawn Steel), to have run a Hollywood studio, (Buena Vista Motion Pictures Group) and now helms her own production company Color Force, responsible for Diary of a Wimpy Kid, and it’s sequels. 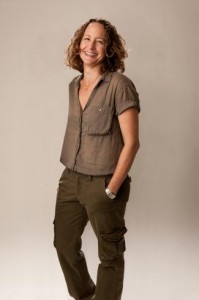 Producer Nina Jacobson Won the Option to “The Hunger Games” when it had only sold about 100,000 copies.

After reading The Hunger Games books, Jacobson immediately connected with Katniss (admittedly her favorite character); however, she realized there were many potential pitfalls in bringing the epic story to screen. Jacobson was intrigued that Katniss enters the games “looking after her own,” and not at all civic-minded but evolves over the course of the story into someone who trusts and cares for others (like Peeta and Rue), transcending selfishness and ultimately reaching an ethical line she won’t cross regardless of the consequences.

Jacobson believes this theme of selflessness is  a powerful one for today’s youth and following a month of discussions with author Suzanne Collins, optioned The Hunger Games. Remaining faithful to the story and not committing the sins of the capitol (Hunger Games speak for not glamorizing the voyeurism and violence) was Nina’s utmost goal.  The project finally landed at LionsGate because the studio had what she calls “a focused development plate.”  I personally love that she (along with Suzanne Collins, Gary Ross and the entire Hunger Games team) is adding a respectable heroine to our children’s cinematic library. “Young girls [as movie viewership] are a huge part of what makes a movie successful,” Nina says, “those who underestimate that [fact] do so at their own peril.”

When asked how the film differs from the book, she points out that we have more than just Katniss’ perspective in the film and that in order to streamline the storytelling some book characters lost out. “Poor Madge was thrown under the bus,” Nina recounts, noting that the impactful gift of the Mocking Jay Pin to Katniss is now Prim’s moment. She also relates that for purposes of time the focus was on Cinna (played by Lenny Kravitz) and not the entire squad of stylists. Other differences or substitutions include the film being shot on location in North Carolina (working as the Appalachian, the Reaping set, the Capitol and the Games) because the locales were “ridiculously perfect,” and of course there are the nice tax benefits the state offers.

Having accumulated a wealth of experience working in film and particularly with child actors, I wanted to know which qualities a producer of her measure looks for in young talent. “Naturalism and authenticity,” we’re her immediate answers noting that the last thing one wants a child actor to do is project “Look how well I’m acting!”

As the Producer of the Hunger Games, Jacobson says she was obviously seeking child actors with talent but also looks for kids (and their parents) “who have their feet on the ground.”  She believes she was doubly fortunate with The Hunger Games young cast, as their performances were organic and natural and they all come from strong families.

The Hunger Games opens nationwide on March 23, 2012 which is in all likelihood the first of four films to be made based on the trilogy. The second film is tentatively scheduled to release Thanksgiving 2013.

About The World Premiere: 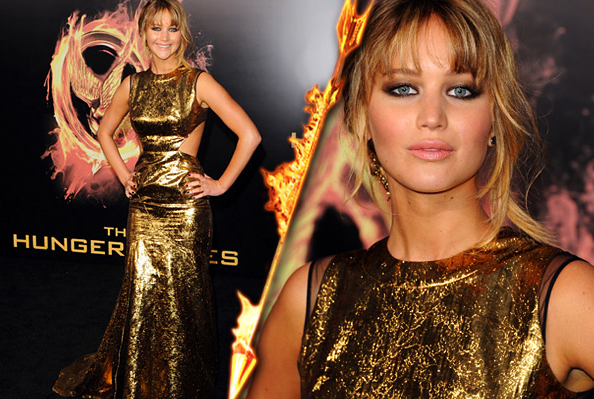 Held at the Nokia Theater in downtown Los Angeles, the movie’s red carpet was actually black and gold. Turns out this color combo was perfect for enhancing Jennifer Lawrence’s shimmering metallic lame Prabal Garung gown that was akin to a custom paint job on a race car and I mean that in the best way possible. She was hands-down the most gorgeous person, man or woman, at the event. Other folks we spied walking the red carpet and or milling about the theater were Josh Hutcherson, Liam Hemsworth, Miley Cyrus, Donald Sutherland, Gary Ross and Allison Thomas.

As I’m not a reviewer, here’s what I’ll call my “quickie recap:”