You are here:Home-Momagers in the News, Parents of Child Actors, THE BUZZ-American Idol’s Controversial Stage Mamas Direct “The Minors” to Group Night Victory!
Previous Next

If you’re watching American Idol this season then you no doubt tuned in for the emotional train wreck event known as “Groups,” when the individual contestants are forced to partner up with the competition and make beautiful, harmonious music together.  One of those singing groups,“The Minors,” is a quintet made up of 15- and 16-year-olds whose mothers, as required by law, are on set with them day and night.   The group includes: Keonna Evans, 16; Jalen Harris, 15; Sarina-Joi Crowe 15; Felix Ramsey, 15; and Deandre Brackensick, 16. I found it refreshing to watch the moms of the minors work together harmoniously as they “directed” their cooperative and talented children through a Glee-like rendition of Queen’s “Somebody to Love.” 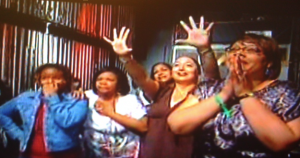 However not everyone got the warm fuzzys watching the stage moms in action and jealously reared it’s ugly head amongst some of the “over 18” contestants, most notably a competing group who was set to perform the same Queen song as The Minors.  The lead singer of the second group seemed particularly peeved and charged that the stage moms coaching was an unfair advantage. But seriously, although it may have been unfair, the whining over it was much more obnoxious than the offense itself.

The best part of the night was watching the mamas jump up and down enthusiastically as their teen songbirds blew the judges away with a near-perfect performance. Judge Jennifer Lopez even went so far as to say, “They just gave the performance of their life right there!”

How the stage moms relate to each other as the competition gets more fierce may be the true “show” to watch this season.