You are here:Home-Parents of Child Actors-Living La Vida Lohan: Momager Sterotypes
Previous Next 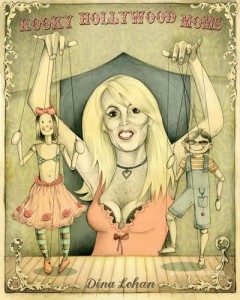 Update: Before this blog posted yet another public fight was reported, this time between Lindsay and mother Dina at sushi hot spot Nobu, Beverly Hills. As usual, paparazzi were there to document every lurid moment.

The Hollywood Mom Blog intentionally refrains from reposting most reports of poorly behaved child stars and their dysfunctional parents – aka momagers and popagers.  However, if we didn’t address the most recent madness involving momager Dina Lohan as reported here, here and here – then this blog wouldn’t be completely relevant for the parents of today’s child actors.

But instead of bashing Dina Lohan for what appears to be her latest misstep as both mother and momager, HMB is choosing to examine the “bigger” picture – the pitfalls of being a famous momager or popager, not by their own merits, but rather famous for being “the mother of” or “the father of” a child star.

Like the iconic evil stepmother from childrens’ literature, the Hollywood Mom is ingrained in our shared subconscious.  The typical Hollywood Momager portrait is that of a pushy, overbearing, task master out to improve her social life and social standing through the hard work of her child(ren) and at any cost; exactly the myth we try to dispel here at Hollywood Mom Blog.  The stereotype can be perpetuated by father’s too, well-illustrated by the awful press David Archuletta’s popager received during last seasons’  “American Idol.”

But there are numerous parents of child stars who prove the cliche’ false on a daily basis.  The patriarchs of the Jonas brood have managed to help their children excel while remaining completely under the radar.  The same parenting props should be given to the momagers and popagers of former child stars Natalie Portman, Reese Witherspoon, Kristen Davis and many others.  Chances are, you don’t even know these parents’ names and occupations, much less what they look like.

So which path did Dina Lohan take that led her to become possibly the most reviled and ridiculed momager in child actor history?  And how can you as the parent of a child actor avoid traveling this same treacherous road?

Many of Dina Lohan’s circumstances, both within her control and not, uniquely qualify her to become a target. First and foremost, she is the mother of a well-known child star.  Having a child who works in the business is different that a child who’s a “star” in the business.  Odds are, even if your child is working frequently, unless he or she becomes a “star” you’ll never be in the unique position to become “hated.”  Count that as a blessing.

It breaks down something like this: Lindsay’s stardom gave Dina the platform to speak her mind and garner tabloid attention.  That platform quickly transformed into a circus side-show as nasty accusations were hurled to and fro between Dina and her then husband Michael; followed by rumors of verbal abuse, drug use and alcoholism. Lohan family arrests and jail time, both Lindsay and her father Michael, were fodder for the blood-thirsty tabloids.  Media attention was continually negative.  Lindsay’s flailing career was spiraling downward as the result of multiple romantic liaisons, drunken crotch-shots, co-stars speaking out on her poor work ethic, kidnapping charges and resultant DUI conviction – the list goes on and on and on and on.

What landed Dina the momager in the hot seat was her choice to become even more public during this chaotic time by launching a reality show that documented her “momager” lifestyle, starring herself and Lindsay’s less famous siblings.  Either intentionally or not, she appeared to have placed herself in a position of authority on the subject of parenting; the extremely dangerous territory of  “the role model.”  Dina’s casual statements that she was “the white Oprah“ for her children and their friends appalled the tabloid press and news that her 15 year old daughter auditioned for a well-known porn director added fuel to the all ready raging media fire.  What was left of  Dina’s credibility as a caring mother was completely shot, the public had had enough with the Lohan clan and the ridicule reached a frenzy.

The moral of the story for the average momager is lay low; work behind the scenes; support your child in making good decisions about both life and career and remember above all else, this is your child’s experience and time in the spotlight, not yours.

As the parent of a child actor you’re burdened with this negative perception from the onset.  It’s the choices you’ll make along the journey that will determine how the story ends.  For the time being, the Lohan story is looking more like “Greek Tragedy” than “Happily-Ever-After,” but as we’ve repeatedly witnessed, the story isn’t over until it’s over.  At the heart of it, Lindsay is a gifted actress with natural charm and I do believe Dina loves her kids. The Lohans could surprise us all yet.

*Drawing courtesy of Gallery of the Absurd, a portrait of Kooky Hollywood Mom Dina Lohan…