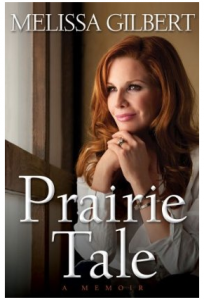 From 1974 through 1983, Former Child Star Melissa Gilbert grew up before our very eyes on the television show “Little House on the Prairie”, starring as Laura Ingalls or “half-pint” as she was endearingly nick-named by on-screen father Michael Landon. Her new book “Prarie Tale: A Memoir” is debuting this month and you can purchase it and meet Melissa in person in Los Angeles on Monday June 15, 2009 at The Grove Farmers Market.Melissa’s memoir illustrates that by today’s standards of troubled Hollywood teens finding their way to adulthood, Gilbert’s personal dramas managed to fly under the radar.  However, as she reveals in her tell-all book, “Prairie Tale: A Memoir,” her youth was not all pebbles in the creek and trips to the general store.As a baby, Melissa was adopted into a legendary show business family: Melissa’s Grandfather Harry Crane was a creator and writer of “The Honeymooners;” grandmother Julia Crane, a talented dancer, was crowned “Miss Brooklyn;” her mother Barbara Crane-Cowan was a producer/ talent manager and younger Sister, actress Sara Gilbert, played the witty daughter & acerbic daughter on the hit television show “Roseanne.”Melissa questioned her own identity and struggled to achieve the image of perfection her momager Barbara apparently demanded.  Gilbert candidly reveals her trials and tribulations with alcohol, drugs, and tumultuous relationships with Hollywood Bad BoysRob Lowe, John Cusack and Billy Idol – one ending in pregnancy and eventual miscarriage.

The book also touches upon a strange rivalry with “Beverly Hills, 90210” actress Shannen Doherty who idolized Gilbert to the point of obsession eventually sleeping with Gilbert’s first husband Bo Brinkman, while they were still married.  Ironically it was the demise of that marriage that led Gilbert on a path of  recovery and personal discovery. This memoir isn’t just pop culture fodder, but rather serves as an inspiration for women everywhere who find themselves suddenly rebuilding their lives.

Gilbert graduated to adult roles with a series of Lifetime made-for-TV movies and most recently completed two terms as president of the Screen Actors Guild during one of the union’s most troubled periods.  Gilbert now serves as President of the Board of Directors of the Children’s Hospice and and Palliative Care Coalition, working directly with the facility’s chronically and terminally ill children to provide them with care and comfort.  She resides in Los Angeles with her husband, Bruce Boxleitner.