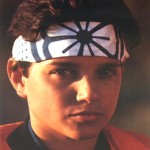 After showing the world his abilities as a young adult in the popular comedy, “My Cousin Vinny,” the amiable actor starred in several under-the-radar productions until he hit again with an appearance on HBO’s “Entourage.”  Most recently Macchio has been cast on the highly-rated television show, “Ugly Betty,” and has been so well-received that he’ll be sticking around for several more episodes.  Congratulations Ralph!  Keep the happy endings coming.